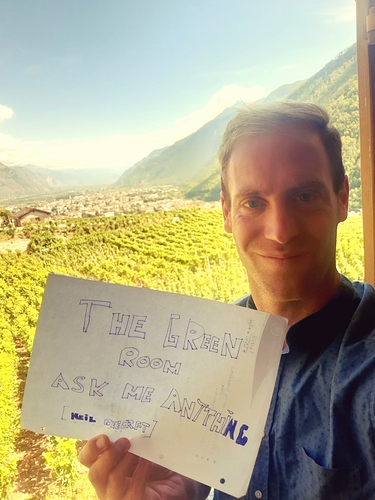 Hello,
I’m Neil Beecroft. I was responsible for sustainable development at UEFA EURO 2016 football tournament in France. In 2020, I was Head of Sustainability for the Lausanne Winter Youth Olympic Games.

As a B Corp Leader, I support ways in which business innovation and sustainability can positively influence the organisational model of sports and the industry.

I am also Head of the Omega European Masters and is the CoFounder of the StartUp PuraWorka and the NGO Sport and Sustainability International (SandSI).

Recently, I achieved a certificate in disruptive innovation at IMD Business School and am ready to blend this field with sustainability.

You’ll need to sign up to the forum to take part.

Once you have signed up, feel free to add this to your calendar by clicking the three dots above.

Hi Neil,
Thanks for hosting this AMA, looking forward to chatting on Tuesday! How did you become involved with major sporting events?

How did you become involved with major sporting events?

Dear Legacy Team, thank you for the opportunity to partake to the Green Room.

To answer to your question, my father was a phd glaciologist – part of the early scientists to witness climate change. Whatever people’s personal beliefs or priorities are, as you know this will have a serious impact on our lives and those of future generations, as well as our sport. My ex-partner worked at the World Business Council for Sustainable Development, and she shared some industry best practices with me. Over the years, I noticed that we at UEFA had room for improvement in terms of our sustainability initiatives and that, as a stakeholder in major sports events, we had scope for greater innovation. UEFA EURO 2016 had so much potential for sustainable development within our event management operations, taking into account French expertise and expectations. Our final tournament draw was set to coincide with COP21, a historic international climate change conference taking place elsewhere in Paris. Most importantly, our reach had the potential to inspire new generations like no other, and the promotion of respect-related initiatives represented one of our core values. It was for these reasons that I knocked on the door of UEFA Events SA’s chief executive, Martin Kallen, and told him that I would like a shot at drafting the charter for the EURO 2016 sustainability project.
That is where it all began.

Hi Neil, what were your major challenges with UEFA? Was it just you or did you have a team?

what were your major challenges with UEFA? Was it just you or did you have a team?

Hey Jonny, nice to e-meet you, thanks for your question.

To be quite honest, going through the budget, charter and concept for the UEFA EURO 2012 sustainability project, I realised that there had been a lack of leadership on this topic within the operations division. I felt that there was room for improvement – a rare opportunity with such a massive sports event. Moreover, this field really corresponded to my values.

The first EURO to incorporate an integrated UEFA-led social responsibility strategy was UEFA EURO 2008 in Austria and Switzerland. Great initiatives were developed, such as the combi-ticket, which allowed fans and certain accredited people to travel free of charge on public transport (even between the two countries) around the time of the match.

Once the project concept was in place for UEFA EURO 2016, the real turning point was when I produced a SWOT analysis in preparation for an application for ISO 2012 1 certification (i.e. certification under a standard for sustainable event management) and presented it to Martin Kallen and EURO 2016 SAS president Jacques Lambert. What I floated as a crazy thought was then presented a few days later in the UEFA EURO 2016 steering group in front of high-level political representatives from the French government and the host cities. That left me with just over a year to deliver ISO 2012 1 certification, when the organisers of the 2012 Olympics in London had spent seven years working on it with far more human and financial resources at their disposal.

I was fortunate to be able to count on the assistance of a consultant and two interns. Numerous stakeholders were involved, including Quantis, who assisted with our event’s environmental and life cycle assessment, and the audit partners who worked on our GRI-compliant Social Responsibility and Sustainability Report. In addition, expert NGOs were consulted on social and environmental initiatives. Lastly, in order to ensure that experts on every aspect of event management were involved, more than 50 sustainability champions drawn from the various functional areas of UEFA EURO 2016 added an extra dimension to the project.

The UEFA FSR (Football Social Responsibility) Team had laid strong foundations and pillars, for us to bring the UEFA Events Operations team to the next level during UEFA EURO 2016.

Hey Neil, can you tell me a little bit more about disruptive innovation? I’ve heard that term before but not quite sure how it translates into the events world! Thanks

can you tell me a little bit more about disruptive innovation? I’ve heard that term before but not quite sure how it translates into the events world!

Dear Shelby, thanks a lot for your question.
I believe time has come to blend the word sustainability with innovation. This will foster a wider empowerment.
A lot of our sustainability work is related to change management. Moreover, time is running out, we therefore need to accelerate. Having achieved recently a certificate on disruptive innovation at IMD business school, I’ve been looking into how this could be applied to event management and where we can we leap frog.

Here is one example I’ve drafted below which comes to my mind re-circular economy that I will want to implement on events I am currently working on. Happy to discuss more business cases if of interest: 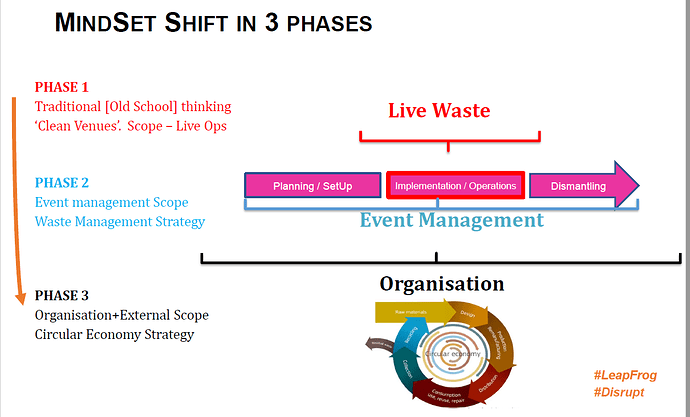 This is so interesting! Was the process similar for Lausanne?

This is fascinating, reminds me a little of design thinking theory too!

We love hearing the unheard stories “behind the scene stories” with events. Can you share what went wrong with an event you were involved in and how you dealt with it?

Was the process similar for Lausanne?

Hey Jonny, thanks for your question.
The process and context for Lausanne 2020 is very different.

The scale of the event is not the same.

On the more techical part, carbon fooprints where done prior and post event and an internal ISO 26 000 audit was done internally.

reminds me a little of design thinking theory too

We are actually currently working on this topic within business innovation and sustainability with experts such as Anne-Cécile Turner (Volvo Ocean Race), Philippe Furrer (ex-IOC) and Geert Hendriks (ex-AISTS). Stay tuned.

Hi Neil,
Is there a sustainability report that we could read for Lausanne 2020?

We love hearing the unheard stories “behind the scene stories” with events. Can you share what went wrong with an event you were involved in and how you dealt with it?

As you know, sustainability still has a long journey ahead. Within sports, all industries meet around the playing field as Dr Allen Hershkowitz would say [one of our NGO www.sandsi.org CoFounder]. The textile, the F&B, the building, the transport industry [and so on] are all supply chain within professional sport.
This means, challenges are faced on a daily basis, but it also means that the opportunity for change is amazing.

One funny story I can recall was at UEFA EURO 2016. We had put all our environmental and social initiatives within the ISO 2012 1 scope. This meant that the ‘Respect your Health’ - tobacco free was to be applied for all stakeholders within our 10 French Venues [fans - organisers - volunteers - suppliers - etc.].

As you an imagine, when SGS Auditors came in on match day 2 of the event, the challenge of ensuring (in France), that nobody was smoking in open air was a sweet adventure. This meant that the Behind the Scene was sometimes quite comical, having our internal auditors running after accreditated people to ensure SGS auditors would not catch them smoking.
We still faced a non-compliance in the end, on that topic. Yet, I can guarantee, we did our utter best, enormous progress was achieved re-non tobacco policy. In the end, this was our main ambition. We knew, we could not achieve 100%, yet we also knew we could improve on the topic.

On a more intense topic, UEFA EURO 2016 faced terrorist threats. To keep sustainability on top of the agenda was a strong proof that politically we had a strong internal back-up .
When a couple of days prior to the UEFA EURO 2016 event, we eventually received the SGS audit plan and that the auditors wanted to interview the venue manager and safety manager less than 2hours prior to kick-off, let’s say that a couple of sleepness nights were spent.
Nevertheless, we set ourselves the challenge to be certified ‘Live’ and that was what we had to deal with.

Is there a sustainability report that we could read for Lausanne 2020?

Here is the carbon footprint (in French - but with illustrations)
https://quantis-intl.com/report/jeux-olympiques-de-la-jeunesse-2020/
and within the official report, you find the sustainability section:
https://lausanne2020-report.azurewebsites.net/en/

Haha I can only imagine that was such a challenge to apply to all your stakeholders, especially in France!! Thanks for sharing!

Great stories - just shows that the events industry has always faced challenges and will keep on thriving!

Thank you Neil, for your insightful responses and thanks all for taking part.

If you have any questions for Neil, you can contact him on here @NeilBeecroft or at PuraWorka.

Do join us next week on Tuesday 8th September for another Ask Me Anything session!

I can only imagine that was such a challenge to apply to all your stakeholders, especially in France

Stakeholders were international and I believe that the challenge is as difficult, but different everywhere. Let’s say that it makes it entertaining.

This topic was automatically closed after 57 minutes. New replies are no longer allowed.